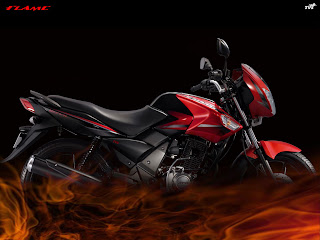 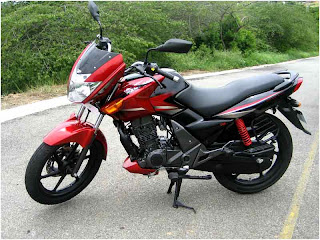 TVS Motors has launched the Flame under a new name, but the new Flame SR125 will omit the controversial twin-spark plug technology over which the Chennai-based company is locked in a two-year old legal battle with rival Bajaj Auto. The Supreme Court had issued an interim order allowing TVS to continue producing the Flame but had restricted the company from marketing them. The order comes on the back of an interim stay from the Madras High Court that had in effect Okayed TVS’ plans to manufacture Flame.

Bajaj claims that Flame will be an infringement of its patented twin-spark plug technology. TVS has countered this arguing that it is an old technology and that Bajaj had no patent claim over it.

SR125 is packed with exciting features like attractive body graphics, alloy wheels, disc brake at the front, electric start and handle bar weights to control vibrations. It has been designed to capture attention in one go. The bike has been given a contemporary urban look by having a black theme. Much of its features like headlamp, front fender, attractive rear view mirrors, body colored shock absorber springs and special engine cowl are designed like the Apache.

The engine’s produces maximum power of 10.5 Bhp at 7500 rpm with maximum torque of 10 Nm at 6000 rpm. It has sporty Delta Edge exhaust that is not just a styling element but also to deliver the smoothest of sounds, lowest emissions and excellent performance.

It features an analogue speedometer but other gauges such odometer, digital clock, fuel gauge, mileage meter are embedded in the digital console. The sporty deltaedge exhaust is not just styling element but also to deliver the smoothest of sounds,lowest emissions and excellent performance.

It also sports a neat lockable, water-bottle-sized cubby hole ahead of the tank, which will prove really useful in daily use. The plastic tank adornments incorporate the indicators and complete the look, but they have their own utility value too. TVS Motors also say that the enhanced engine now has lower NVH and ’significantly’ enhanced low and mid range performance and lesser noise.

The disc brake version is priced at 47,550/- ex-showroom comes in dual tone colours of red and blue along with an all black edition and is available at all TVS dealerships across the country. However, for those not wanting in the disc brake, the bike is also available with drum brakes.
Posted by Sibhi Kumar SenthilKumar at 5:43 PM