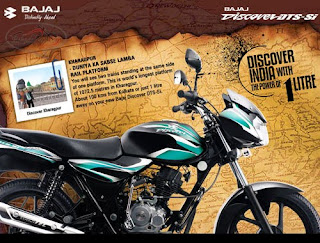 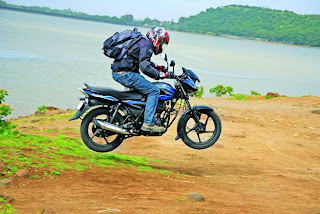 Discover was launched with a 110 cc engine, till Bajaj got into the illusion that 100 cc segment was dying in India. Accordingly the Discover was upgraded to 125 cc and later fitted with a 135 cc mill. Till recently there were rumours that a bigger 150cc Discover was in the pipeline. As Bajaj India had announced earlier that will be launching a new motorcycle each month for 6 months beginning January 2009 but till now none of them is actually a new bike!! All of them are mere cosmetic version of existing models:
1) Platina got the engine from XCD 125 with minor cosmetic changes.
2) XCD got the engine from Discover with minor cosmetic changes.
3) Facelifted Discover 135 with minor cosmetic changes.
4) Facelifted Pulsar 150 which got the looks of Pulsar 180.
5) Facelifted Pulsar 180 which got the looks of Pulsar 200.
6) And Recently, Bajaj took a step backwards by removing the Fi (Fuel Injection) technology from their flagship model Pulsar 220.
Now, Bajaj India has launched New Discover 100 & according to Bajaj they have launched a 100cc bike to compete with Hero Honda Splendour & Yamaha Crux. But they don't understand that this will not help them in boosting sales. People want new models and latest designs.
Bajaj has set a new record with Discover 100
Bajaj India has set a record of sorts by selling 5,00,000 units of the Discover 100 in a matter of 225 days. The 100cc Discover has also carved a leadership position in West Bengal and the entire North-East region by becoming the highest selling motorcycle in the overall two-wheeler category. The company was unable to meet demand in February and there was a stock-out situation in some dealerships. The company has already ramped-up production from the earlier 75,000 units to 1-lakh units per month to meet demand.
Main Features Of New Discover 100:
- Electric Start
- Alloy wheels
- Auto choke
- LED Tail Lamps
- Twin pilot lamps
- Maintenace free battery
- 5 Speed Gearbox
- Second Generation DTS-Si 2.0 Engine
- Gas charged rear suspension
- Twin pod instrument panel
The new engine is a 100 cc DTS-Si (Dual Twin Spark Swirl Induction) 2.0 engine, which is claimed by Bajaj Auto as world's most fuel efficient engine. The newly revised DTS-Si engine features a completely redesigned oval pent roof combustion chamber and port geometry along with Bajaj’s twin spark technology for the most complete combustion.
The frictional losses have been reduced by using Molykote piston and a special coating on the valves which eliminate carbon formation. Bajaj’s ExhausTEC system also been refined to deliver even more torque at lower rpm’s. According to ARAI Discover 100 returns a fuel efficiency figure of 89kmpl. Under standard condition, fuel efficiency is expected to be around 125kmpl higher than the XCD 109kmpl. Bajaj is yet to get the ARAI figures under standard conditions.
Discover 100 uses telescopic forks at the front and gas charged nitrox suspension at the rear. Ride quality is superb with nitrox suspension and softer seats soaking up the road shocks and bumps well. The 1305mm wheelbased bike uses drum brake at the front and the rear. The tubular dual cradle structure and the rectangular, box section swing arm.at the rear offers a nimble character.
New Discover 100 is available in 5 shades:
- Black Green
- Black Red
- Black Blue
- Red
- Blue
New Discover 100 has been priced very competitively at Rs. 43,000.00 for the self start model. It is also available in kick start option which is priced at Rs. 41000.00
Posted by Sibhi Kumar SenthilKumar at 5:26 PM